I can’t even call the post “Ohio” because we actually went to eight different states (including states in the Northeast, Southwest and Southeast ) during our six weeks in the area.  It was pretty amazing.  All of our travels took place during the last two weeks, but we put the first part of our visit to good use too!

Visited with my grandma frequently & celebrated her 91st birthday!

Continued to deny having allergies while Burke visibly suffered…

Now, don’t judge me for the next photo; I’m looking particularly rough.  Dad and I took the dogs for a bike ride or a run just about every day.  One day I thought it would be extra fun to put both the dogs on the bike.  Marley (the black one) really liked it because about every time after that he got strangely close to the bike, as if he wanted on again. 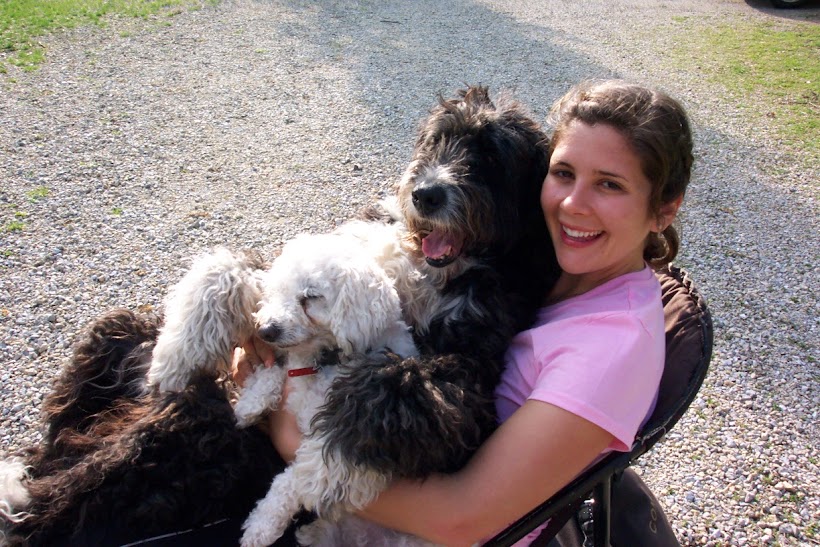 This is a recumbent bicycle, definitely not made for a person and two dogs.

We also made good use of our time helping out with Corner Shack, the amped up version of the youth group I went to in high school.  It was fun to see some of the kids that I remembered from when I volunteered at Kidmunity (sunday school) and kids that I coached on the swimming team.

The week we spoke was a record high for number of kids, but there are 50-60 weekly.

Then we routed through Indiana to go to Chicago.  It was the best weekend ever.

Then we went to Missouri to hang out with a lot of Burke’s family.  My parents came along, and it was the first time they had seen each other since the wedding.

It’s about an eleven hour drive from where we live in Ohio to Joplin, MO.  On the way, we stopped at the St. Louis Zoo and on the way back we stopped and had dinner with Burke’s cousin Rick and his family!

Shortly after returning from Missouri, we went to Harrisburg for one of my college friend’s wedding.  Julie looked so beautiful, and we had a great time catching up with other friends at the wedding!

Our last stop on the tour lead us to Philidelphia, where we flew out to San Francisco.  Fortunately I know a lot of people who live there including my friend Marilyn!  She hosted us so well during our couple of short hours there and even prepared a lovely picnic lunch.

It was so great seeing friends and family while we were in the Midwest (and Southwest, Southeast and Northeast!).  We loved visiting with you all and are already looking forward to next time!

2 comments on “The Midwest”