The Pearl of the Adriadic

Burke and I have differing opinions about what was the best part of the honeymoon.  For Burke, he experienced it on the plane ride to Europe.  Usually large international flights have little televisions with music, movies, and games on the back of every seat.  With some effort you can sift through the sub par, dated selection to find a few Easter eggs.  However, it was on this flight that Burke discovered that Sigur Ros released an album 9 months prior without him knowing.  He listened to the cd again and again, and has not yet stopped listening… even one month later.

I mentioned Niko in my last post.  When we got to the apartment he got his neighbor with better English to explain to us that there was a mix up and we would need to stay in her house for the first two nights.  Although the two apartments were actually in the same building, we liked staying at Niko’s much better.  We were very welcomed at his house both by him and his wife Mrs. Niko (their last name was way too hard to pronounce).  Most times when we came home during the day or evening Mrs. Niko offered us juice and water.  Another nicety of the Niko house was the breakfast. On our first night Niko wanted us to commit to breakfast everyday that we were there.  No way would we do that without seeing what breakfast was first.  So we awoke to breakfast and found that it was quite delectable and Burke said it was only five kuna or about a dollar so it was a win (later we discovered that breakfast was actually twenty five each).

Our honeymoon was filled with a myriad of beaches.  We went to rocky beaches, sandy beaches,  cliff-like beaches, island beaches, touristy beaches, empty beaches, and one dirty beach.  The beaches were all so different but all so beautiful with clear, crisp water.  The first beach we went to I found to be incredibly freezing and felt some stares from the Croatians who dove right in as I babied my way into the abyss.  During that time I also protested that, “I hate Croatia and its cold water!”  After getting out we would lay on our five dollar towels from naš dom and I gave myself and Burke plentiful rock massages (Burke didn’t appreciate it too much). 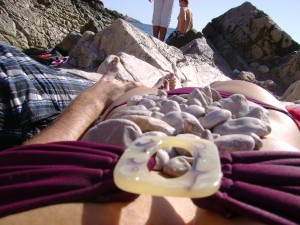 After long days at the beach, we would go home to get clean before going out for dinner.  We found going home a little arduous usually consisting of a walk, a bus ride, another walk, and then at the very end was 126 stairs.  And 126 may not sound like a lot of stairs, but if you break it down, its about ten flights.  On long days Burke and I tried to stave off our hunger, rarely making it past eight or so and branding us as tourists because apparently Croats eat dinner as late as ten or eleven pm.  No matter the time,  we quickly discovered that Coatian cuisine is basically what we think of when we think of Italian food, which makes sense since it is just on the other side of the Adriadic.  The most notable thing was their inclusion of corn on everything.

So far we’ve covered, music, food and beaches; all good things, but now it’s time for my real favorite.  You may know that I love to travel (duh) and explore my surroundings.  One of our first nights in Dubrovnik we went to the part of the city called Old Town.  It is a beautiful walled city still standing from medieval times and is a UNESCO World Heritage Site.  After walking around on a few of the main streets, Burke and I decided that was not enough.  We walked up a huge set of stairs and continued on to a few back alley streets, where we discovered people actually lived.  Finally we found my very favorite things about our honeymoon: the stray cats! First there were just two that greeted us in the alley, but those cats lead us to a lair of kittens.  They were young but not too young to cuddle so we stayed there until a human mother and two daughters came home with mačka food.

We wandered our way back inward towards the main streets and watched a four man band march through the city and later observed that it was a nightly occurrence.  We saw a dog walk saunter by and I asked Burke if he thought we could take him home.  Burke of course said no, he had an owner around somewhere, but later that evening as we sat on stairs leading to a locked door we saw the dog again! We successfully loured him to our perch, but when he got there I realized he was rather frightening due to an enormous underbite.  Don’t worry though, I conquered my fear and discovered that he was quite the agreeable dog, at which point I named him Our Dog. 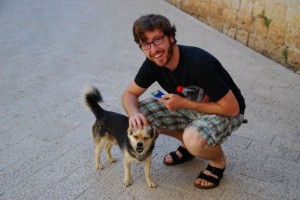 On another outing to Old Town, our eye (one flesh) was caught by a sign advertising beer for only 18 kuna.  It was a night club, but it was early enough in the evening that it wasn’t obnoxiously night clubbish so we partook of the deal.  On the way up we noticed that the reason the price was so low was because it was the bar’s happy hour: 8-11pm (a testament to the night life of Dubrovnik).  Exit Club was seemingly normal with its garish eurotrance, stale smokey atmosphere and parceled bowls of a pretzel/peanut combo, but it was not.  As we sat there consuming our beverages, we noticed a sign or two on the wall revealing that Exit Club was going to have an erotic dance show starting at 12.  An immediate exodus was imminent.

Throughout our honeymoon Burke and I joked about each others splurges; his first splurge was sunscreen and mine was conditioner.  His next splurge was on a slightly larger scale though.  Because we were unable to bring our super cool bicycles with us (we’re still working on figuring that out), Burke missed riding bikes and requested that we rent bikes from the bike rental spot on the island Lopud.  The trip to the island was a worthwhile splurge; however, we agree that the bikes were not.  There were three paths that one could take on the island: left, straight, and right.  Straight was to the beach on the other side of the island so we took that first.  On our way some tourists told us that it was a mistake to even rent the bikes because it was an impossible hill to climb on a bike.  We peddled up the mountain slowly but surely, and I am happy to report that I was still on the bike when the aforementioned tourists drove by on a golf cart.  Shortly after I gave up and began to push.

We spent the afternoon on the sandy beach; it was so warm there was no need for rock massages.  Once crispy, we decided to explore the island and ascended the mountain from the other direction.  Remember those two other paths?  We took them.  Turning right took us about 500 meters up a hill to a construction site and turning left took us through some buildings about 250 meters until we hit a large set of stairs.  At that point we ditched the bikes and climbed the stairs to find an oasis of grapes and archaic church ruins which we thoroughly explored before ferrying back to Gruž.  Burke added a lot of photos from most of our honeymoon (at least the parts you’ve heard about thus far) so check those out too and you should have enough B&L entertainment to get you through to my next post. 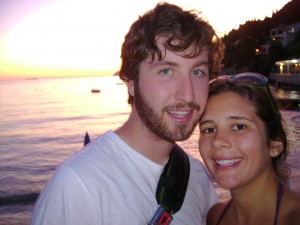